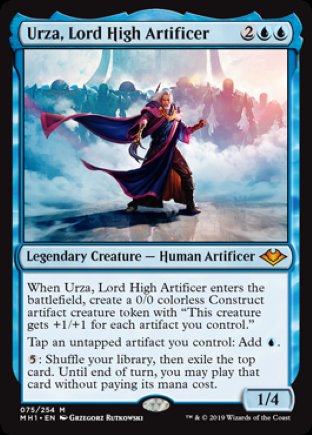 When Urza, Lord High Artificer enters the battlefield, create a 0/0 colorless Construct artifact creature token with "This creature gets +1/+1 for each artifact you control."
Tap an untapped artifact you control: Add U.
5: Shuffle your library, then exile the top card. Until end of turn, you may play that card without paying its mana cost.

6/14/2019
You can tap any untapped artifact you control, including an artifact creature you haven’t controlled continuously since the beginning of your most recent turn, to pay the cost of Urza’s mana ability. Tapping an Equipment this way won’t affect its abilities or the equipped creature.

6/14/2019
If you cast a card “without paying its mana cost,” you can’t choose to cast it for any alternative costs. You can, however, pay additional costs. If the card has any mandatory additional costs (such as that of Lesser Masticore), you must pay those to cast the card.