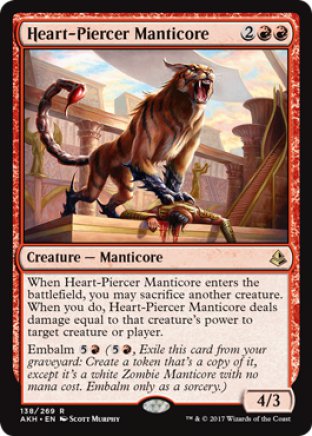 When Heart-Piercer Manticore enters the battlefield, you may sacrifice another creature. When you do, Heart-Piercer Manticore deals damage equal to that creature's power to any target.
Embalm 5R (5R, Exile this card from your graveyard: Create a token that's a copy of it, except it's a white Zombie Manticore with no mana cost. Embalm only as a sorcery.)

4/18/2017
The sacrificed creature’s last known existence on the battlefield is checked to determine its power.

4/18/2017
Heart-Piercer Manticore features a new style of triggered ability. When it enters the battlefield, its triggered ability goes on the stack without a target. While that ability is resolving, you may sacrifice a creature. If you do, a second ability triggers and you pick a target that will be dealt damage. This is different from other abilities that say “If you do . . .” in that players may cast spells and activate abilities before a creature is sacrificed and then again after the creature is sacrificed but before damage is dealt.