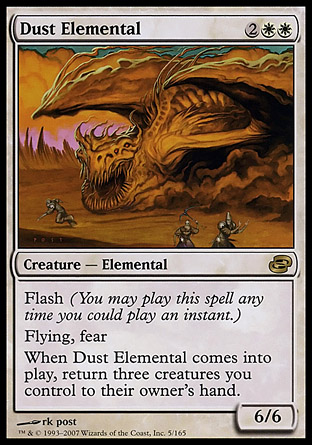 Flash (You may cast this spell any time you could cast an instant.)
Flying; fear (This creature can't be blocked except by artifact creatures and/or black creatures.)
When Dust Elemental enters the battlefield, return three creatures you control to their owner's hand.

2/1/2007
If you are instructed to return more creatures than you control, you must return all the creatures you control to their owner’s hand.

6/8/2016
You may return this creature itself to its owner’s hand as its triggered ability resolves. If you don’t control enough other creatures, you must return it.

6/8/2016
The ability doesn’t target any creature. You don’t choose what to return until the ability resolves. Once the ability has started to resolve, no one can respond to the choice.