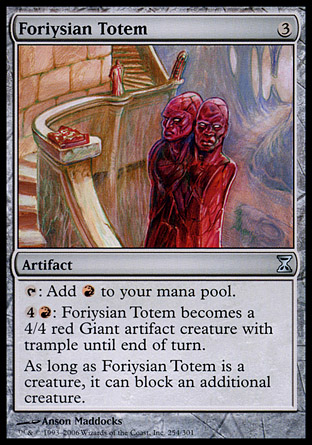 T: Add R.
4R: Foriysian Totem becomes a 4/4 red Giant artifact creature with trample until end of turn.
As long as Foriysian Totem is a creature, it can block an additional creature each combat.

9/25/2006
If an effect says Foriysian Totem can’t block, then it can’t block any creatures.

8/1/2008
A noncreature permanent that turns into a creature can attack, and its T abilities can be activated, only if its controller has continuously controlled that permanent since the beginning of their most recent turn. It doesn’t matter how long the permanent has been a creature.