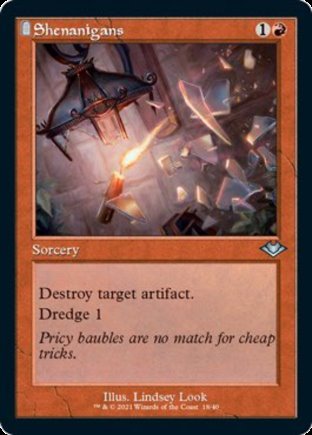 Destroy target artifact.
Dredge 1 (If you would draw a card, you may mill a card instead. If you do, return this card from your graveyard to your hand.)

2019-06-14 - wotc
If an effect puts a card into your hand without specifically using the word "draw," you're not drawing a card. Dredge can't replace this event.

2019-06-14 - wotc
Dredge can replace any card draw, not just the one during your draw step. One card draw can't be replaced by multiple dredge abilities.

2019-06-14 - wotc
Once you've announced that you're applying a card's dredge ability to replace a draw, players can't take any action until you've put that card into your hand and put the top cards of your library into your graveyard.