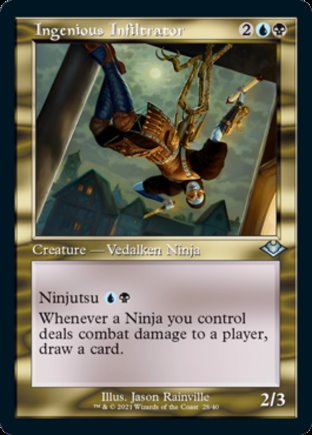 Ninjutsu UB (UB, Return an unblocked attacker you control to hand: Put this card onto the battlefield from your hand tapped and attacking.)
Whenever a Ninja you control deals combat damage to a player, draw a card.

2019-06-14 - wotc
If Ingenious Infiltrator is dealt lethal combat damage at the same time a Ninja you control deals combat damage to a player, its ability triggers.

2019-06-14 - wotc
The ninjutsu ability can be activated only after blockers have been declared. Before then, attacking creatures are neither blocked nor unblocked.

2019-06-14 - wotc
As you activate a ninjutsu ability, you reveal the Ninja card in your hand and return the attacking creature. The Ninja isn't put onto the battlefield until the ability resolves. If it leaves your hand before then, it won't enter the battlefield at all.

2019-06-14 - wotc
Although the Ninja is attacking, it was never declared as an attacking creature (for purposes of abilities that trigger whenever a creature attacks, for example).