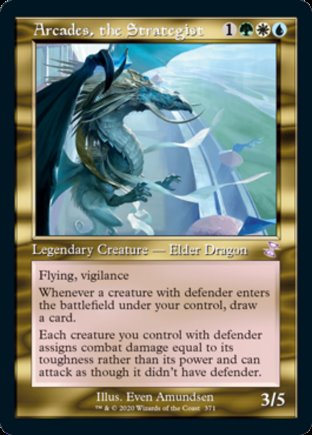 Flying, vigilance
Whenever a creature with defender enters the battlefield under your control, draw a card.
Each creature you control with defender assigns combat damage equal to its toughness rather than its power and can attack as though it didn't have defender.

2018-07-13 - wotc
Arcades's last ability doesn't actually change any creature's power. It changes only the amount of combat damage it assigns. All other rules and effects that check power or toughness use the real values. For example, Rabid Bite won't cause a creature to deal damage equal to its toughness.

2018-07-13 - wotc
If Arcades leaves the battlefield after a creature with defender has attacked, that creature remains an attacking creature, although it will assign damage equal to its power.