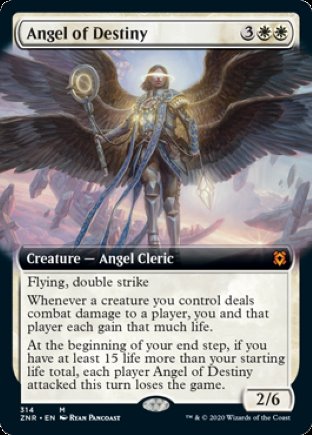 Flying, double strike
Whenever a creature you control deals combat damage to a player, you and that player each gain that much life.
At the beginning of your end step, if you have at least 15 life more than your starting life total, each player Angel of Destiny attacked this turn loses the game.

9/25/2020
If a creature you control somehow deals combat damage to you (most likely because its combat damage was redirected), you gain twice that much life as a single life-gaining event.

9/25/2020
In a Two-Headed Giant game, Angel of Destiny’s last ability can trigger as long as your team’s life total is greater than your team’s starting life total by 15 or more life.