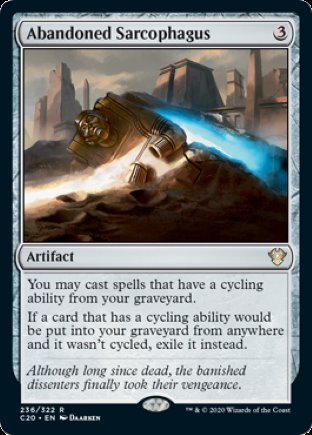 You may cast spells that have cycling from your graveyard.
If a card with cycling would be put into your graveyard from anywhere and it wasn't cycled, exile it instead.

7/14/2017
Abandoned Sarcophagus doesn’t grant you permission to do anything with those cards except cast them. For example, you can’t cycle nonland cards with cycling from your graveyard.

7/14/2017
Certain older cards have variants of cycling, such as basic landcycling or Wizardcycling. Abandoned Sarcophagus’s effect lets you cast these cards and exiles them if they weren’t discarded for their cycling variant’s ability.