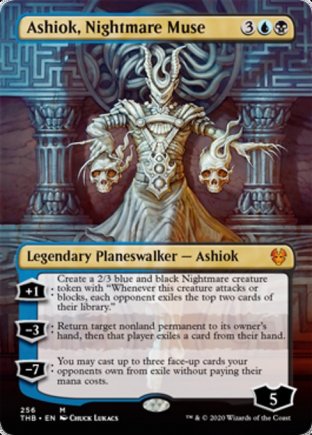 +1: Create a 2/3 blue and black Nightmare creature token with "Whenever this creature attacks or blocks, each opponent exiles the top two cards of their library."
-3: Return target nonland permanent to its owner's hand, then that player exiles a card from their hand.
-7: You may cast up to three face-up cards your opponents own from exile without paying their mana costs.

1/24/2020
Any effect that exiles a card exiles it face up unless that effect specifies otherwise.

1/24/2020
The card exiled while resolving Ashiok’s second ability may be the one that was returned to its owner’s hand.

1/24/2020
If Ashiok’s second ability returns a token to its owner’s hand, that player can’t exile that token from their hand. They must exile a card from their hand if possible.

1/24/2020
You may cast any face-up cards your opponents own from exile while resolving Ashiok’s last ability, not just those exiled by Ashiok’s second ability or by Ashiok’s Nightmare tokens.

1/24/2020
If you wish to cast any exiled cards, you do so as part of the resolution of Ashiok’s last ability. You can’t wait to cast them later. Timing permissions based on a card’s type are ignored.

1/24/2020
In a multiplayer game, if a player leaves the game, all cards that player owns leave as well. If you leave the game, any spells and/or permanents you control from Ashiok’s last ability are exiled.