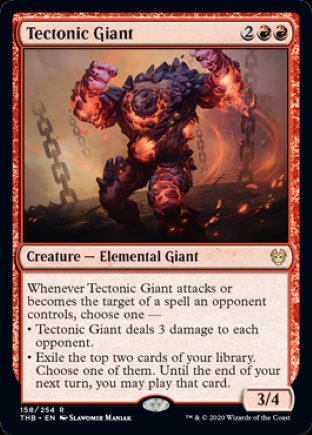 Whenever Tectonic Giant attacks or becomes the target of a spell an opponent controls, choose one -
- Tectonic Giant deals 3 damage to each opponent.
- Exile the top two cards of your library. Choose one of them. Until the end of your next turn, you may play that card.

1/24/2020
An ability that triggers when a creature becomes the target of a spell resolves before the spell that caused it to trigger. It resolves even if that spell is countered.

1/24/2020
Players can cast spells and activate abilities after the triggered ability resolves but before the spell that caused it to trigger does.

1/24/2020
If a spell targets Tectonic Giant more than once, its ability triggers only once.

1/24/2020
You choose which of the exiled cards you’ll be able to play while the ability is resolving. You can’t wait to pick one later. The other card remains in exile.

1/24/2020
Playing an exiled card causes it to leave exile. You can’t play it multiple times.

1/24/2020
If you don’t play the exiled card that you chose, it remains in exile with the card you didn’t choose.