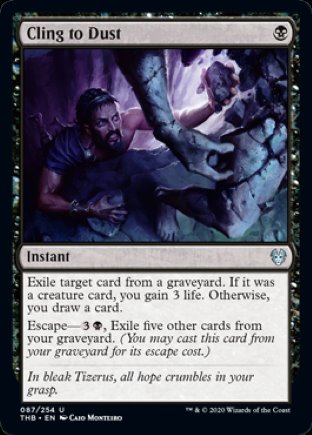 1/24/2020
If the target card is an illegal target by the time Cling to Dust tries to resolve, the spell won’t resolve. You won’t gain 3 life or draw a card.

1/24/2020
If the exiled card is a creature card that’s also another card type (such as an enchantment creature), you gain 3 life. You don’t also draw a card.

1/24/2020
Cling to Dust can target one of the five cards you’ll exile to pay its escape cost. In this case, the spell won’t resolve.

1/24/2020
Escape’s permission doesn’t change when you may cast the spell from your graveyard.

1/24/2020
If a card has multiple abilities giving you permission to cast it, such as two escape abilities or an escape ability and a flashback ability, you choose which one to apply. The others have no effect.

1/24/2020
If you cast a spell with its escape permission, you can’t choose to apply any other alternative costs or to cast it without paying its mana cost. If it has any additional costs, you must pay those.

1/24/2020
If a card with escape is put into your graveyard during your turn, you’ll be able to cast it right away if it’s legal to do so, before an opponent can take any actions.

1/24/2020
Once you begin casting a spell with escape, it immediately moves to the stack. Players can’t take any other actions until you’re done casting the spell.