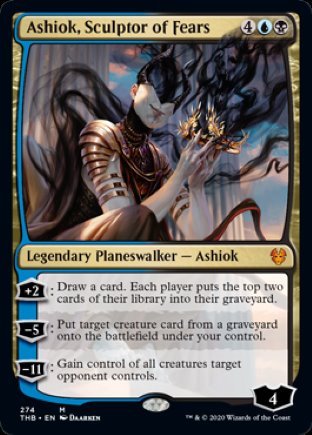 +2: Draw a card. Each player puts the top two cards of their library into their graveyard.
-5: Put target creature card from a graveyard onto the battlefield under your control.
-11: Gain control of all creatures target opponent controls.

1/24/2020
The effect of Ashiok’s last ability lasts indefinitely. It doesn’t expire as the turn ends or if Ashiok leaves the battlefield.

1/24/2020
In a multiplayer game, if a player leaves the game, all cards that player owns leave as well. If you leave the game, any permanents you control from Ashiok’s second ability are exiled, and the control effect of Ashiok’s last ability ends.