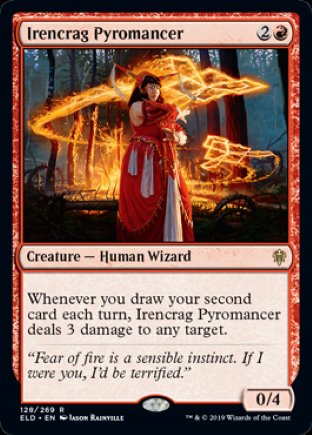 Whenever you draw your second card each turn, Irencrag Pyromancer deals 3 damage to any target.

10/4/2019
If an effect instructs you to draw multiple cards, the ability triggers after you draw whichever is the second one for the turn. You choose a target (if any) for the ability after you’ve drawn and looked at all of the cards and finished resolving the spell or ability that caused you to draw them.

10/4/2019
If a spell or ability causes you to put cards into your hand without specifically using the word “draw,” it’s not a card drawn.