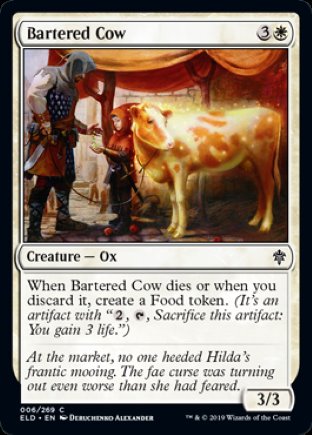 When Bartered Cow dies or when you discard it, create a Food token. (It's an artifact with "2, T, Sacrifice this artifact: You gain 3 life.")

10/4/2019
Bartered Cow’s ability is a triggered ability, not an activated ability. It doesn’t allow you to discard it or sacrifice it whenever you want; rather, you need some other way of discarding it or causing it to die.

10/4/2019
Food is an artifact type. Even though it appears on some creatures (such as Gingerbrute), it’s never a creature type.