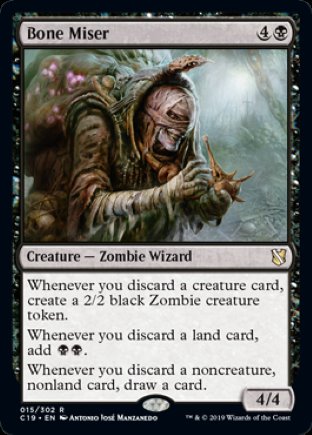 8/23/2019
Bone Miser’s abilities are triggered abilities, not activated abilities. They don’t allow you to discard a card whenever you want; rather, you need some other way of discarding a card.

8/23/2019
Bone Miser’s second ability isn’t a mana ability. It uses the stack and can be responded to. Notably, this means that you can’t pay a cost of “2, Discard a card” by discarding a land card and using the BB produced to pay for the 2.