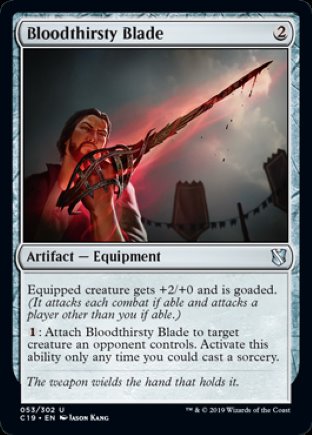 Equipped creature gets +2/+0 and is goaded. (It attacks each combat if able and attacks a player other than you if able.)
1: Attach Bloodthirsty Blade to target creature an opponent controls. Activate this ability only any time you could cast a sorcery.

8/23/2019
Bloodthirsty Blade has no equip ability. There’s normally no way to have it attached to your own creature, although certain combinations of other cards make this possible.

8/23/2019
You still control Bloodthirsty Blade while it’s equipped to an opponent’s creature. You can move it any time you could cast a sorcery; the equipped creature’s controller can’t.

8/23/2019
If the equipped creature can’t attack for any reason (such as being tapped or having come under that player’s control that turn), then it doesn’t attack. If there’s a cost associated with having it attack, its controller isn’t forced to pay that cost, so it doesn’t have to attack in that case either.

8/23/2019
Attacking with a goaded creature doesn’t cause it to stop being goaded. It remains goaded as long as it’s equipped with Bloodthirsty Blade.