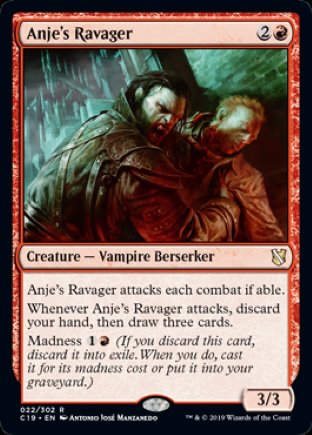 8/23/2019
If Anje’s Ravager can’t attack for any reason (such as being tapped or having come under that player’s control that turn), then it doesn’t attack. If there’s a cost associated with having it attack, its controller isn’t forced to pay that cost, so it doesn’t have to attack in that case either.

8/23/2019
You draw three cards while resolving the triggered ability, even if you discarded zero cards.

8/23/2019
If any of the cards you discard have madness, you’ll choose whether to cast them after you’ve drawn three cards.