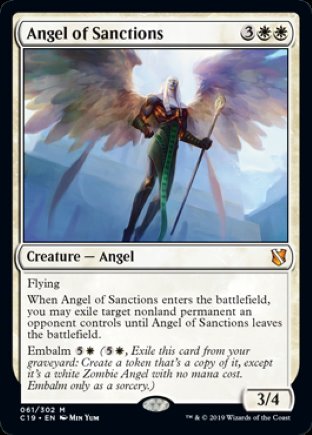 4/18/2017
If Angel of Sanctions leaves the battlefield before its triggered ability resolves, the target permanent won’t be exiled.

4/18/2017
If a token is exiled this way, it will cease to exist and won’t return to the battlefield.

4/18/2017
The exiled card returns to the battlefield immediately after Angel of Sanctions leaves the battlefield. Nothing happens between the two events, including state-based actions.

4/18/2017
In a multiplayer game, if Angel of Sanctions’s owner leaves the game, the exiled card will return to the battlefield. Because the one-shot effect that returns the card isn’t an ability that goes on the stack, it won’t cease to exist along with the leaving player’s spells and abilities on the stack.