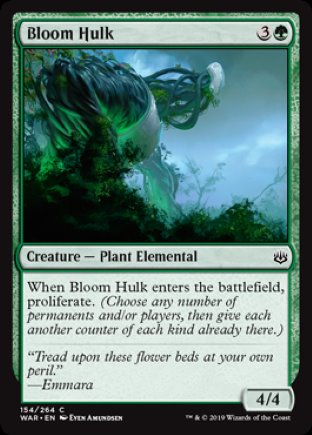 When Bloom Hulk enters the battlefield, proliferate. (Choose any number of permanents and/or players, then give each another counter of each kind already there.)

5/3/2019
The War of the Spark set doesn’t include any ways for players to have counters, but some cards in other sets say that a player “gets” a counter of a certain kind. Notably, emblems aren’t counters.

5/3/2019
You can choose any permanent that has a counter, including ones controlled by opponents. You can’t choose cards in any zone other than the battlefield, even if they have counters on them.

5/3/2019
Players can respond to the spell or ability whose effect includes proliferating. Once that spell or ability starts to resolve, however, and its controller chooses which permanents and players will get new counters, it’s too late for anyone to respond.

5/3/2019
Putting loyalty counters on planeswalkers doesn’t cause their loyalty abilities to be activated.

Soul of the Harvest 2