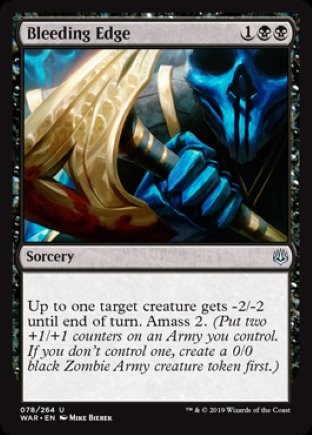 Up to one target creature gets -2/-2 until end of turn. Amass 2. (Put two +1/+1 counters on an Army you control. If you don't control one, create a 0/0 black Zombie Army creature token first.)

5/3/2019
You may cast Bleeding Edge without choosing a target creature. You’ll just amass 2. However, if you choose a target and that target become illegal before Bleeding Edge resolves, the spell won’t resolve and you won’t amass.