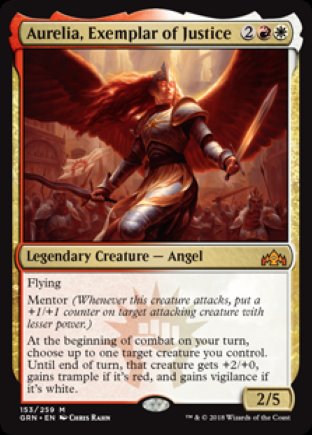 Flying
Mentor (Whenever this creature attacks, put a +1/+1 counter on target attacking creature with lesser power.)
At the beginning of combat on your turn, choose up to one target creature you control. Until end of turn, that creature gets +2/+0, gains trample if it's red, and gains vigilance if it's white.

10/5/2018
Once Aurelia’s last ability has resolved, the creature keeps whatever bonuses it got from that ability even if its colors change.

10/5/2018
Mentor compares the power of the creature with mentor with that of the target creature at two different times: once as the triggered ability is put onto the stack, and once as the triggered ability resolves. If you wish to raise a creature’s power so its mentor ability can target a bigger creature, the last chance you have to do so is during the beginning of combat step.