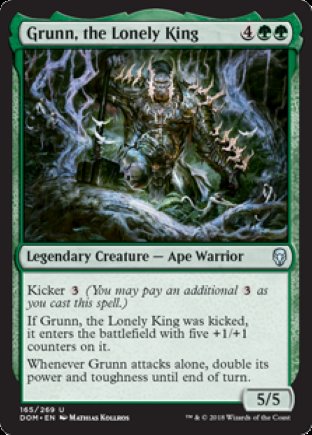 Kicker 3 (You may pay an additional 3 as you cast this spell.)
If Grunn, the Lonely King was kicked, it enters the battlefield with five +1/+1 counters on it.
Whenever Grunn attacks alone, double its power and toughness until end of turn.

4/27/2018
If an effect instructs you to “double” a creature’s power, that creature gets +X/+0, where X is its power as that effect begins to apply. The same is true for its toughness.

4/27/2018
A creature attacks alone if it’s the only creature declared as an attacker during the declare attackers step (including creatures controlled by your teammates, if applicable). For example, Grunn’s last ability won’t trigger if you attack with multiple creatures and all but one of them are removed from combat.