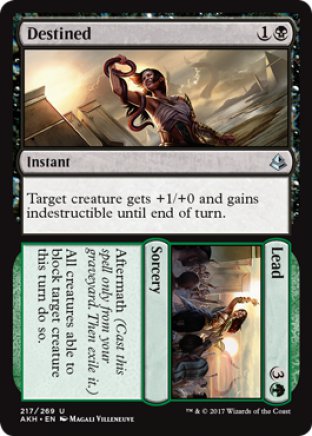 Target creature gets +1/+0 and gains indestructible until end of turn.

4/18/2017
All split cards have two card faces on a single card, and you put a split card onto the stack with only the half you’re casting. The characteristics of the half of the card you didn’t cast are ignored while the spell is on the stack. For example, if an effect prevents you from casting green spells, you can cast Destined of Destined // Lead, but not Lead.

4/18/2017
Each split card is a single card. For example, if you discard one, you’ve discarded one card, not two. If an effect counts the number of instant and sorcery cards in your graveyard, Destined // Lead counts once, not twice.

4/18/2017
Each split card has two names. If an effect instructs you to choose a card name, you may choose one, but not both.

4/18/2017
While not on the stack, the characteristics of a split card are the combination of its two halves. For example, Destined // Lead is a green and black card, it is both an instant card and a sorcery card, and its converted mana cost is 6. This means that if an effect allows you to cast a card with converted mana cost 2 from your hand, you can’t cast Destined. This is a change from the previous rules for split cards.

4/18/2017
If you cast the first half of a split card with aftermath during your turn, you’ll have priority immediately after it resolves. You can cast the half with aftermath from your graveyard before any player can take any other action if it’s legal for you to do so.

4/18/2017
If another effect allows you to cast a split card with aftermath from any zone other than a graveyard, you can’t cast the half with aftermath.

4/18/2017
If another effect allows you to cast a split card with aftermath from a graveyard, you may cast either half. If you cast the half that has aftermath, you’ll exile the card if it would leave the stack.

4/18/2017
A spell with aftermath cast from a graveyard will always be exiled afterward, whether it resolves, it’s countered, or it leaves the stack in some other way.

4/18/2017
As blockers are declared, any creature that’s tapped or affected by a spell or ability that says it can’t block doesn’t block. If there’s a cost associated with having the creature block, no player is forced to pay that cost, so it doesn’t block if that cost isn’t paid.

7/14/2017
Once you’ve started to cast a spell with aftermath from your graveyard, the card is immediately moved to the stack. Opponents can’t try to stop the ability by exiling the card with an effect such as that of Crook of Condemnation.