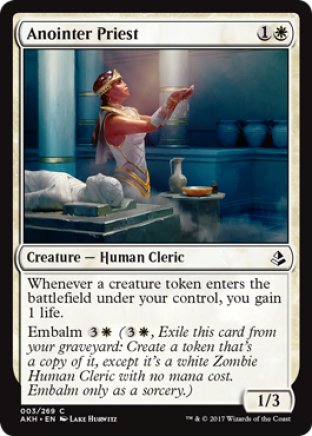 Whenever a creature token enters the battlefield under your control, you gain 1 life.
Embalm 3W (3W, Exile this card from your graveyard: Create a token that's a copy of it, except it's a white Zombie Human Cleric with no mana cost. Embalm only as a sorcery.)

4/18/2017
If Anointer Priest is a token, most likely because it’s embalmed, it will cause its own ability to trigger when it enters the battlefield.

4/18/2017
If Anointer Priest enters the battlefield at the same time as a creature token, its ability triggers for that other creature. For example, if you control Anointed Procession and embalm Anointer Priest, the triggered ability of each one triggers twice and you gain a total of 4 life.