Serie: Oath of the Gatewatch (OGW) 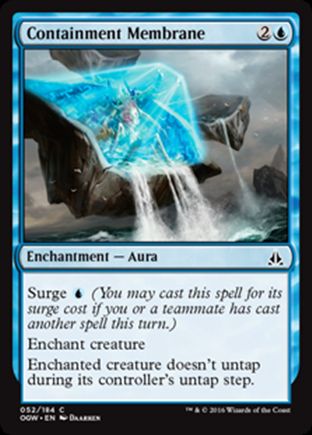 Surge U (You may cast this spell for its surge cost if you or a teammate has cast another spell this turn.)
Enchant creature
Enchanted creature doesn't untap during its controller's untap step.

1/22/2016
Containment Membrane can target and be attached to an untapped creature. It just won’t have any effect until that creature becomes tapped.

1/22/2016
The enchanted creature can still be untapped by other spells and abilities.

1/22/2016
For some cards, surge represents only an alternative cost, a discount that applies if you or a teammate has cast another spell this turn. Other cards, like Reckless Bushwhacker, have additional abilities or effects if you paid the surge cost to cast the spell.

1/22/2016
The other spell that you or a teammate cast can be one that’s resolved, one that was countered, or (for instants with surge) one that’s still on the stack.

1/22/2016
Casting a spell for its surge cost doesn’t change its mana cost or its converted mana cost.