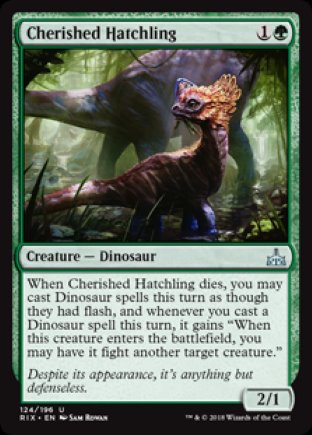 When Cherished Hatchling dies, you may cast Dinosaur spells this turn as though they had flash, and whenever you cast a Dinosaur spell this turn, it gains "When this creature enters the battlefield, you may have it fight another target creature."

1/19/2018
During the turn Cherished Hatchling dies, you may cast any number of Dinosaurs as though they had flash.

1/19/2018
You must pay the costs for spells you cast this way. If there’s an alternative cost you can pay instead of the mana cost for a Dinosaur spell, you may pay that cost instead.

1/19/2018
For the triggered ability that the entering Dinosaur gains, if the target is illegal when it tries to resolve or if the Dinosaur that entered the battlefield has left the battlefield, no creature will deal or be dealt damage.

1/19/2018
For the triggered ability that the entering Dinosaur gains, you choose a target when the ability goes on the stack, but you don’t choose until that ability resolves whether those creatures fight.

1/19/2018
If an effect refers to a “[subtype] spell” or “[subtype] card,” it refers only to a spell or card that has that subtype. For example, March of the Drowned is a card that benefits Pirates and features Pirates in its illustration, but it isn’t a Pirate card.